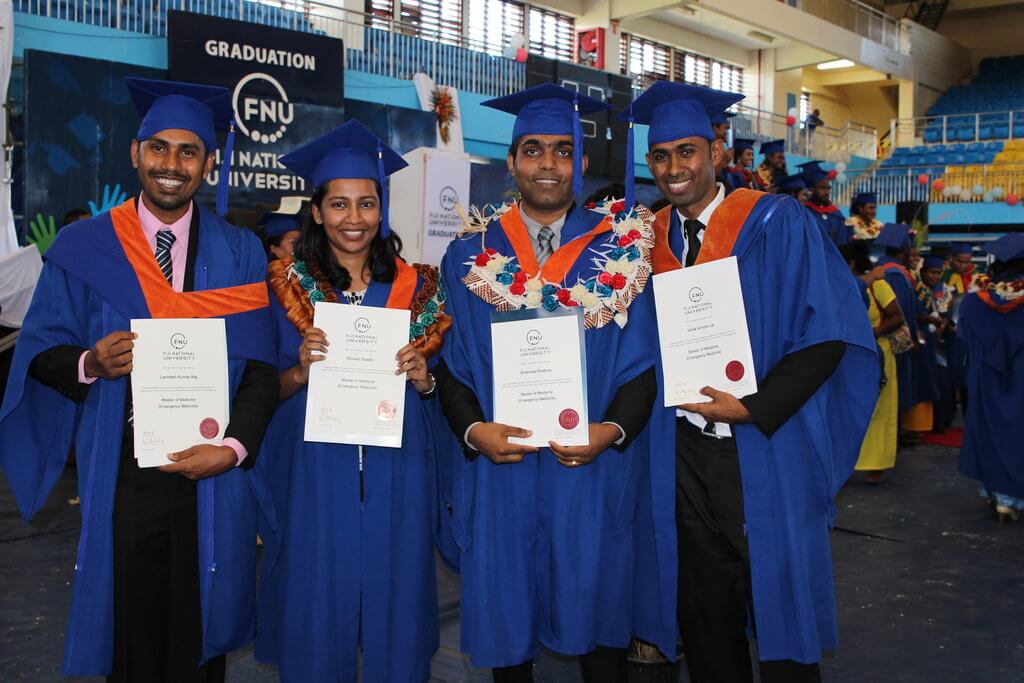 There is nothing such as an ordinary day in Dr Shivani Reddy’s calendar – each day comes with its unique opportunities and challenges for the country’s only female Emergency Specialist.

“I generally provide a consultant cover on the floor.  I work as a Clinical Consultant but I do some administrative work as well in terms of running the Department, attending meetings and organising workshops,” says Dr Reddy. “On a day to day basis I need to have an overall picture of the Department, which includes clinical consultations, providing supervision and training to the Registrars, interns and students; facilitating referrals and managing patient flow in the department.”

It was her dad’s dream for Dr Reddy to become a doctor and she managed to land an AUSAID scholarship which allowed her to join the Bachelor of Medicine and Bachelor of Surgery (MBBS) programmme at Fiji School of Medicine (FSM), which now comes under the Fiji National University’s (FNU) College of Medicine, Nursing and Health Sciences (CMNHS).

Studying at FSM was different since she had not expected smaller classes which provided individual attention.

“FSM had smaller classes than I expected and I also had classmates from other countries.  Here, when you are part of a class, you are part of a family not just from Fiji but from other Pacific Islands as well.  I did not expect to meet so many people and forge friendships with students from different countries,” said Dr Reddy.

“Our lectures would have around 60 people and practical sessions would be even smaller but this resulted in classes being more interactive.  Lecturers and tutors were inspiring and made learning fun.  They were always there for support and guidance.”

Being from Suva, Dr Reddy did not stay on campus for the entire duration of her study.  She only stayed on campus in Year 4 as she had to spend more time in the hospital being on-call.

After completing her MBBS, Dr Reddy undertook her internship in CWMH for a year before being transferred to Kadavu in 2011 as part of her rural posting.

“Kadavu was interesting. Being an intern at CWMH meant that there were a lot of senior people around for supervision and support. That is no longer there when you are in a rural setting. Kadavu was a great learning experience.”

“At times I had to take up multiple roles. There was no Pharmacist on the island at the time so sometimes I would see patients, prescribe medications and then run to the Pharmacy to dispense them.”

This allowed Dr Reddy to become more aware of and appreciate different peoples’ role in a hospital setting.

There were also those experiences which can not be forgotten.

“The power would go off at midnight which made things interesting.  If I had to go to the Hospital in the middle of the night, I would be juggling in the dark with my torch and the keys to get into the building and attend to patients using a hurricane lantern.”

“You learn so much more than you would in a central hospital with all the facilities readily available.  In a rural setting you learn to be innovative and more patient.  You are involved with community outreach programmes, attending community meetings, looking after the resources, ordering supplies, writing reports – and organising workshops along with your usual duty as a Doctor.”

“Serving people in the rural areas allows you to feel what it means to be ‘outside’ with limited resources unable to do certain diagnostic testing.  Later, it makes you more understanding.”

Although her initial plan was to do Internal Medicine after returning from Kadavu, she first had to complete a brief stint in ED at CWMH.

“Consultants started coming over and talking about it and I saw how good Emergency Medicine was. The biggest difference you can make is in the first couple of hours when a patient is brought in and Emergency Medical staff are the ones they meet first.  Another reason I was interested in EM was what I witnessed when my dad was presented to the ED in cardiac arrest.  During the time one of the visiting emergency consultants attended to him.  I saw the support, understanding, sympathy and compassion with how he treated my father,” she said.  Sadly, her dad passed away.

Being the only Female Emergency Specialist in the Country

“Being the only female Emergency Specialist is a blessing and struggle because you have to work harder to prove yourself and females tend to be more critical of themselves.  The Medical field in general has been male dominated. I was greatly influenced by Associate Professor Dr Anne Creaton who was the Coordinator of the Emergency Medicine programme at FNU at the time. She’s a great role model as a clinician and a leader. Working with her made me realise that my gender is not a barrier to succeed in this specialty. Also my colleagues are very supportive,” said Dr Reddy.

In 2016, Dr Reddy was awarded the inaugural Mika Ah Kuoi Award for Excellence on completion of her Master of Emergency Medicine in Fiji.

While making progress in her career, Dr Reddy has noticed how FNU has been changing over time as well.

“FNU has changed for the better in terms of facilities and amount of support given to students.  For example, when I was attached to the Emergency Department as a student there was just a logbook to fill with no support classes and very little supervision.  Now, students have classes, more support and the Emergency team of FNU is young, approachable and dynamic.  There’s also been development in terms of research.  More emphasis is placed on the value of research and that’s the way to go.”

She encourages students to appreciate the time they have at university.  “It is important to live in the moment and savour your life as a student.  The future will come soon enough.  You will not get to experience this again.  There will be a lot of difficulties as you progress through your career and your studies.  Always remember why you are doing what you are doing and this will help you overcome whatever challenges you face.”