Dr. Tukana leads the fight for a healthier nation 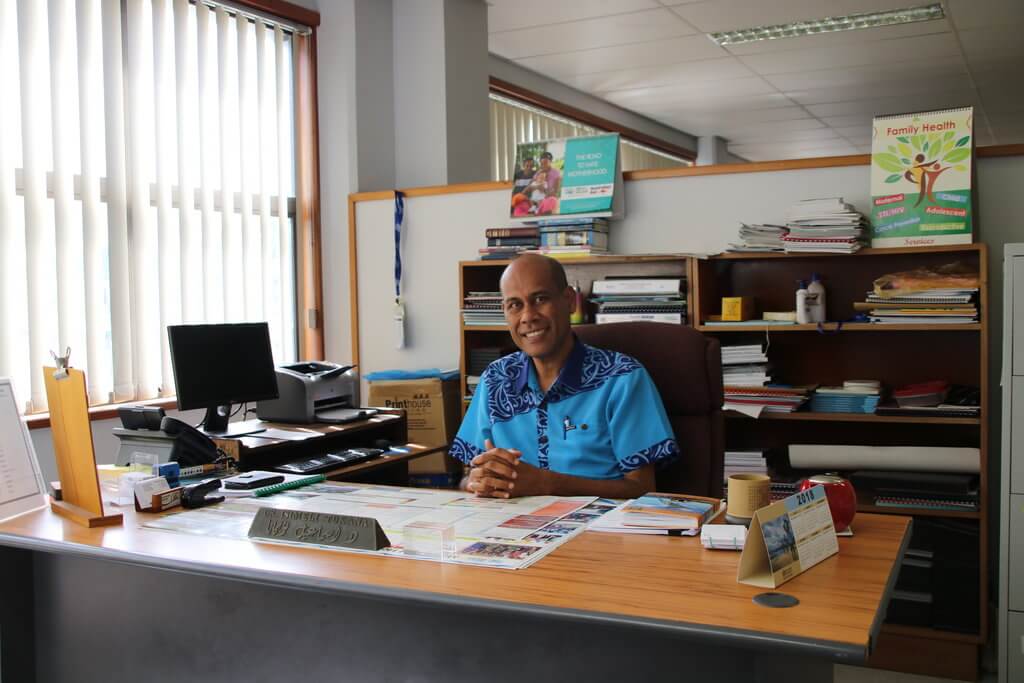 He can be best described as Fiji’s Health Warrior given the passion, dedication and commitment with which Doctor Isimeli Tukana conducts his work as a health professional and the National Adviser Non-Communicable Disease (NCD) at the Ministry of Health and Medical Services.

Dr Tukana is a realist and does not beat around the bush, especially when it comes to the topic of health and specifically NCDs, something which he holds very dear to his heart.

His passion for a healthy and prosperous Fiji runs deep in his veins and he leads by example, keeping a balanced diet, being a teetotaller and undertaking daily exercise.

“I have to do what I preach, it’s that simple and that’s my golden rule,” said Dr Tukana.

The discipline Dr Tukana commands today is from his strict upbringing as well as being born to two medical experts.

Dr. Tukana hails from Vusaratu village in the district of Natewa in the province of Cakaudrove. His mother is from the village of Nabouwalu in Ono in Kadavu.

Dr. Tukana’s father was a Radiographer while his mother was a Nurse and he grew up in Raiwaqa, Suva. He attained his primary education at Draiba Primary School and then attended Ratu Sukuna Memorial School and Marist Brothers High School for his secondary education.

“I was born in 1965, at the end of colonial era, attended primary and secondary school in the Independent era and by the time I reached tertiary and started work I was in the coup era,” said Dr Tukana.

Growing up as a child, Dr Tukana displayed great discipline and obedience. The tone was obviously set by his parents. Being a doctor was what was expected from him by his parents. “It was not a matter of want to, but simple obedience to parental advice for me,” he said.

Listening and obeying your elders, Dr Tukana believes are key ingredients to his success in life.

To all the current students he said, “Just listen and do what your teachers teach and train you to do! You should be fine.”

After high school, he embarked on a journey influenced by his father to attend the Fiji School of Medicine (FSM), now College of Medicine, Nursing and Health Sciences (CMNHS) and graduate as a doctor. Although the young Dr Tukana was a hostel student, he spent most of his university life at home with his parents.

“University Life was interesting. I was always at home with my parents and university life introduced me to boarding life. But even though I was boarding I still spent more time at home than in school,” he said.

“Because the course was long and the entire college roll of FSM then was about 100, we knew our peers very well – the university stories of our peers are well-known and we still refer to them even now when we have become seniors in the health industries. They were the best times and memorable ones too,” he added.

Dr. Tukana graduated with a Bachelor of Medicine and Bachelor of Surgery (MBBS) in 1991. His first posting was at Savusavu Hospital in 1993. He worked in Savusavu for two years before being appointed as the Sub-Divisional Medical Officer (SDMO) in Kadavu. He later served as the SDMO in Lakeba, Lau (2001-2003) and was then transferred to the Western Division where he served as the SDMO Lautoka/ Yasawa for two years 2003 – 2005.

Later in 2005, Dr Tukana was promoted as the Chief Medical Officer – Public Health (West). After serving for three years, he was appointed as the National Adviser NCD in 2009, a post he currently holds. Dr Tukana also serves as the Head of the National Wellness Centre since 2012.

Dr Tukana attained his Master’s in Public Health (MPH) from the University of New South Wales, Sydney, Australia in 2003.

Dr. Tukana is married with four beautiful daughters to a Pharmacy Technologist whom he met while attending FSM.

As a medical professional who cared deeply for the well-being of fellow Fijians, Dr Tukana decided to focus on NCDs given the chronic impact it was having on people.

“Its simple logic that I chose to deal with the etiology of the biggest troublemaker in Fijian health – NCDs. It causes the most illnesses, disabilities and causes the most number of deaths below 70 years of age in Fiji,” he said.

According to Dr Tukana, NCDs was never a medical concern in Fiji prior to 1985, however due to changes in lifestyle this has grown to be a serious national concern.

“NCDs are medical consequences of lifestyle or behaviors. Therefore if the causes are lifestyle habits then the solution must include our lifestyle interventions. We in Fiji deliver two lifestyle interventions. One is to promote Wellness Fiji focusing on seven lifestyles in the following order of priority – Breathing, Thinking, Moving, Drinking, Eating, Resting and Reproducing. Second is to promote Wellness Fiji in the seven stages of life – conception, Infancy, Toddler, Child, Teenager, Adult and Senior Citizen. Wellness Fiji is Gender, Ethnic, Faith neutral and people centered,” he stated.

He emphasized that the key interventions in NCD are aimed at the protection of Fijian Children from conception to 18 years through the empowerment of women and parenting.

“The rights of the child to life and health are well enshrined in our constitution. We must ensure that all Fijians are nurtured in an environment that is conducive and promotes wellness at all means – advocacy, fiscal and regulatory measures,” added Dr Tukana.

Dr Tukana said NCDs is manageable, if people adopt a healthy and well-balanced lifestyle. He said the best way is to eat local foods and be active.

“At the end of the day it’s about choices. However it is our duty to make ensure that wellness choices are easy, accessible and affordable,” he added.

Given the alarming impact of NCDs in Fiji, Dr Tukana said it’s important that people recognise this and take immediate action to ensure they do not fall victims to the tentacles of this great killer.