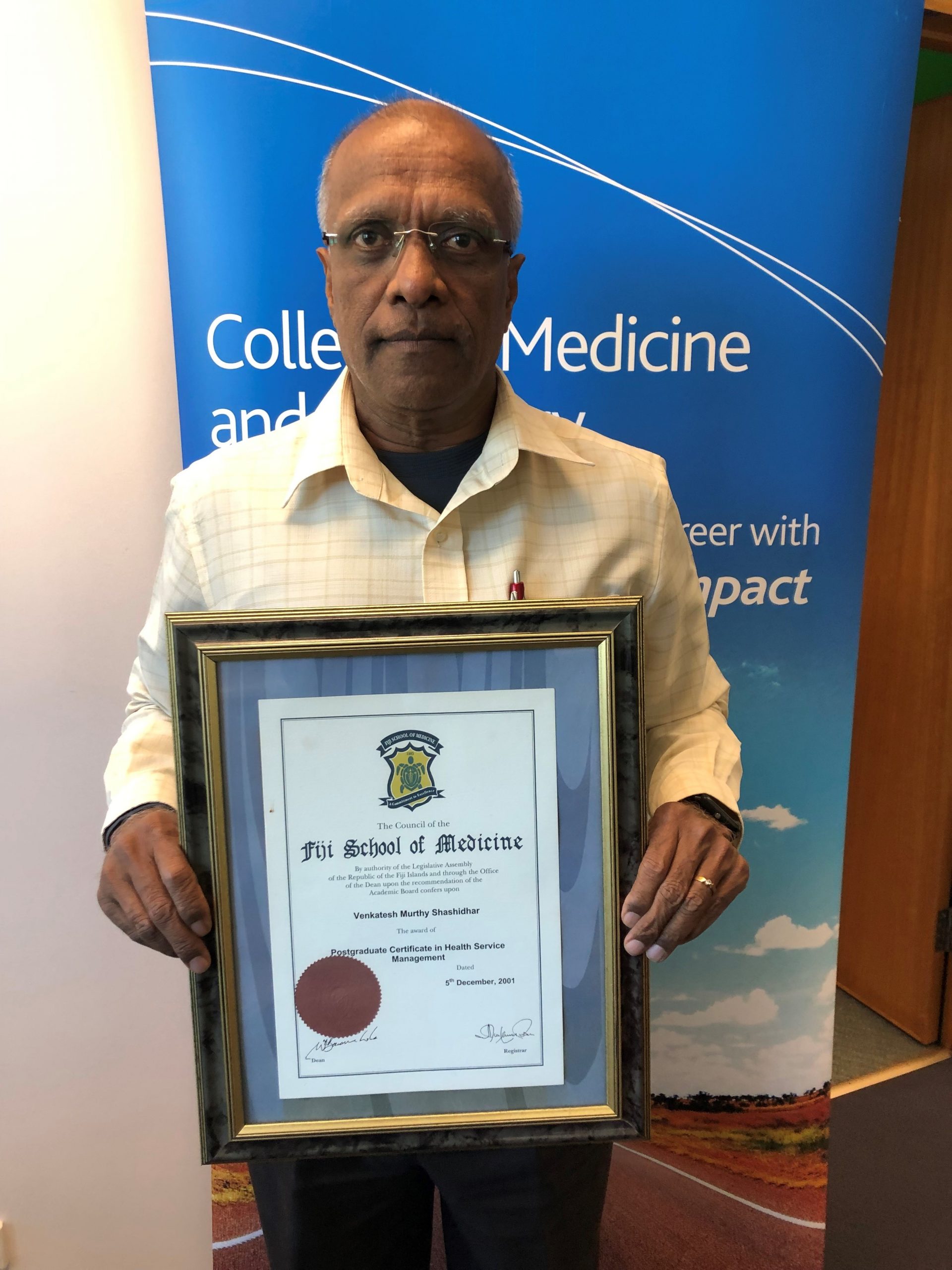 Learning, travelling and teaching has been a passion for Dr Shashidhar Venkatesh Murthy. His quest has taken him on a journey from his homeland India, to Saudi Arabia, Fiji and now to Australia.

Between 2000 and 2005, Dr Murthy was a familiar face at the Fiji School of Medicine (FSM) which is now under the Fiji National University’s (FNU) College of Medicine, Nursing and Health Sciences (CMNHS). During this period he served as the Associate Professor and Head of Pathology.

“I liked the FNU programme outline and content and felt it would provide me with the essential skills and knowledge I needed for leadership roles.”

“Looking back, I can say that FNU has developed so much over the years with new programmes and structures and has improved its infrastructure as well.”

“While I was pursuing my master’s degree, I had already started working as an Anatomic Pathology trainee and Pathology tutor at Department of Pathology, Kasturba Medical College and Hospital in Manipal, India. Once I graduated, I was promoted to Lecturer in Pathology and eventually an Assistant Professor of Pathology in 1991.”

Dr Murthy then worked as a Specialist Pathologist, Consultant in Hematology and Laboratory Manager at the Ministry of Health Dammam Chest Hospital & Regional Laboratory in Dammam, Saudi Arabia from 1991 to 2000.

“In 1999, I applied to work at FSM and was selected. So, I came to Fiji in 2000 and started working here. The place was different, the language and culture were different. It was a different environment altogether, however, I liked the change in scenery and looked forward to working in Fiji.”

“Some of my key achievements were solving several departmental procedures, setting up a pathology lab and pathology museum, I also started the Pacific Pathology Online forum which is an online discussion forum between Fiji and overseas (Netherlands, Switzerland, USA & Australia) experts to solve complex cases.”

After serving for almost five years in FNU, he moved to James Cook University (JCU), Australia to work as the Senior Lecturer and Head of Pathology at JCU’s School of Medicine. In 2007, he was promoted to Associate Professor – a position he currently holds.

He has also acquired a Master’s in Business Administration (Educational Leadership) (MBA) from JCU.

Dr Murthy currently resides in Australia with his family and plays an active role in the Hindu community as well.

“I like to give back to the community and I do that through my role as the Director of the Hindu temple here, being the past president of the Hindu community, and I also volunteer at Meals on Wheels.”

Sharing his advice to students, Dr Murthy said, “Plan your time and resources well. If you fail to plan, you should prepare to fail.”