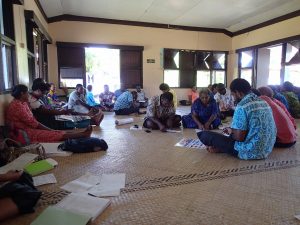 Community surveys and studies being conducted regarding Blue Foods.

Blue foods include finfish, shellfish, seaweed and other aquatic plants captured or cultured in freshwater and marine ecosystems, which play a central role in food and nutrition security. The Pacific Ocean; the largest in the world houses a wide range of functional and bioactive blue foods that are also used in the pharmaceutical, nutraceutical and food processing industries.

Dr Lako, a Food Scientist, believes the Pacific Islands food systems are fragile from the growing climate stress and disasters and other challenges related to geographical remoteness with limited arable land, which could be compensated by the abundance of bioactive and functional marine food resources available in our large Pacific Ocean. The COVID-19 pandemic, Dr Lako adds, appears to further exacerbate the challenges due to its impacts on the economy by crippling tourism, labour market, remittances and international trade.

“Food produced have high losses due to limited storage and processing capabilities, which pose high food safety risks and challenges especially with perishable foods such as fish,” said Dr Lako.

“Then there is high transport cost due to import dependency on fuel, high reliance on imported foods contributing to dietary transition away from traditional staples to processed foods high in salt, sugar and fat coupled with sedentary activities that lead to the rapid rise in overweight and obesity that are associated with NCDs, while undernutrition persists among certain vulnerable groups.”

During her presentation at the National Food System Dialogue, Dr Lako emphasized the importance of chemical analyses of blue foods in the determination and isolation of their bioactive components and functions properties as key transformative opportunities. 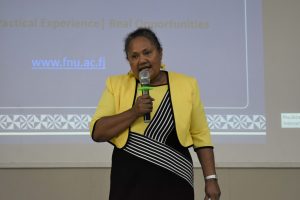 “These include omega-three fatty acids in three forms; alpha-linolenic acid (ALA), eicosapentaenoic acid (EPA), and docosahexaenoic acid (DHA) that has various health benefits such as reduction of bad cholesterol (LDL), lowering risks to cancer, heart attacks and strokes, etc.”

“Tuna and seaweeds that are readily caught and available in our oceans are good sources of omega 3 fatty acids, which could be developed into fish oil capsules. The various antioxidants in seafood such as carotenoids in sea urchin gonads, chitosan and chitin in shellfish crust, and anti-cancer in sponges to name a few will be good promotional activities for women and youths.”

“Functional properties in seafood include carrageenan and agar, which are readily available in red seaweeds, gelatin in fish scales and muscles, while pectin from seaweeds and algae are used as food additives and thickening agents in the food processing industry.”

The Associate Dean Research at FNU’s College of Engineering, Science and Technology (CEST) highlighted that instead of exporting dried seaweeds with minimal income, extraction and selling these bioactive and functional components will fetch higher prices and will create employment opportunities for Fijians.

The transformative pathways that the senior academic has undertaken to date include pilot processing and scoping for market access of sea urchins as collaborative work between FNU, PHAMA, Ministry of Fisheries and Sai Yee Company Ltd, preservation and processing of seagrapes in collaboration with ACIAR, IMR and Pacific Seaweed Fiji Ltd and supervision of students’ research on carrageenan and agar from local seaweeds and the value-adding of Tilapia products into high-value commodities.

Dr Lako further explained the challenges that affect the transformation pathways of some functional blue foods, which includes ciguatera fish poisoning (CFP). She has collaborated with the Ministry of Fisheries, Ministry of Health, Reef Explorer Fiji and Japan Institute of Health Science on 3-prong research:

Dr Lako highlighted that “the current global food systems are said to be underperforming and there was a high possibility that the Sustainable Development Goals (SDGs) were not on track and that we may not be able to achieve the SDGs set by 2030.”

She said, for this reason, the UN-Food System Summit planned for 23 September 2021 aims at maximizing the co-benefits of the food systems approach across the entire 2030 Agenda, whilst meeting the challenges of climate change.00

The FNU academic added that the solutions and transformative action opportunities, partnerships and initiatives identified at the National Food System Dialogue will be our national collective voice to the global level.