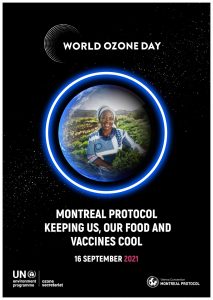 Theme: Montreal Protocol – Keeping us, our food and vaccines cool

What is ozone and where is it in the atmosphere?

Ozone (O3) is a highly reactive gas composed of three oxygen atoms. It is both a natural and man-made product that occurs in the Earth’s upper atmosphere (stratosphere) and lower atmosphere (troposphere). Depending on where it is in the atmosphere, it affects life on Earth in good and bad ways. Stratospheric ozone is formed naturally through the interaction of solar ultraviolet radiation (UV) and molecular oxygen (O2). The ‘ozone layer’ is approximately 9.66-48.28 km above the Earth’s surface and reduces the amount of harmful UV radiation that reaches the Earth’s surface. Harmful ultraviolet radiation such as UV-B causes sunburn. Long term exposure to high levels of UV-B harms human health and negatively impacts upon the ecosystems. The atmosphere acts as a multi-layer shield that protects the earth. The ozone molecules absorb the UV-B, which then forms an oxygen molecule and separate oxygen atom. This process then leads to the reformation of ozone molecules. Another form of ultraviolet light, UV-C is emitted by the sun. UV-C is completely absorbed by the oxygen molecules in the stratosphere and never reaches the Earth’s surface.  By absorbing the harmful UV-B and UV-C in the stratosphere, the ozone layer is protecting the surface from harmful radiation.

‘Ground level’ ozone is formed from photochemical reactions between two major classes of air pollutants. This type of ozone is found at the lower atmosphere level (Troposphere or ground-level ozone) and is a harmful health irritant and component of smog. It is not responsible for the ozone hole.

The term ozone hole refers to the depletion of the protective ozone layer in the stratosphere over the polar regions. Stratospheric ozone is constantly produced in the tropical latitudes where large-scale atmospheric convection currents and the strong winter polar vortices push the ozone towards the poles where concentration builds up. During the dark polar winter months, the ozone molecules are destroyed in a natural process of creation during the summer and destruction during the winter. The natural chemical reactions are shown below. 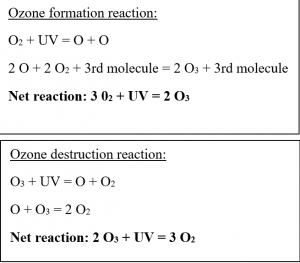 In the 1980s, scientists discovered dramatic ozone loss in the Antarctic spring months of September and October. They also determined that this was due to the increasing concentrations of ozone depleting substances- Chlorofluorocarbons or CFCs. These chemicals can remain in the atmosphere for many years. At the poles, the CFCs attach to ice particles in clouds. When the sun comes out during the polar spring, the ice particles melt, releasing the ozone depleting molecules from the ice which then begin to break apart the molecular bonds in the UV radiation-absorbing ozone, depleting the ozone layer.  The following reactions show the ozone destruction cycle by 2 reactive halogen gases; chlorine monoxide, bromine monoxide and chlorine and bromine atoms: 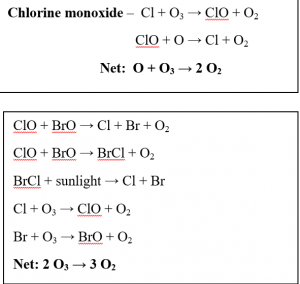 Explanation: The chloro- and bromo- fluorocarbons break down when in the presence of UV radiation. This causes the C-Cl and C-Br bonds to break and release uncharged atoms of chlorine and bromine respectively. The chlorine atom is considered a catalyst for ozone destruction as Cl and ClO are reformed each time the reaction cycle is completed and ozone is simply removed. The same occurs with bromine analogues. Visible sunlight is required to complete each cycle. During polar nights and periods of darkness, ozone is not destroyed by these reactions.

Fiji ratified the Montreal Protocol on 23rd October, 1989. The Montreal Protocol is part of the 1985 Vienna Convention for the Protection of the Ozone layer. On 19th December, 1994, the United General Assembly proclaimed 16th September the International Day for the Preservation of the Ozone Layer, commemorating the date in 1987, on which the Montreal Protocol on Substances that Deplete the Ozone Layer was signed. The Montreal Protocol on Substances that Deplete the Ozone Layers is the landmark multilateral environmental agreement that regulates the production and consumption of nearly 100 man-made chemicals referred to as ozone depleting substances (ODS). When these substances are released into the atmosphere, the chemicals damage the stratospheric ozone layer, Earth’s protective shield that protects humans and the environment from harmful ultraviolet radiation from the sun. The protocol is to date the only UN treaty ever that has been ratified by every country on Earth- all 198 UN member states.

One potent group of ozone depleting substances, are the Hydrochlorofluorocarbons (HCFCs). They have been used worldwide in refrigeration, air conditioning and foam applications but are being phased out under the Montreal Protocol since they deplete the ozone layer. HCFCs are also powerful greenhouse gases that are nearly 2,000 times more potent that carbon dioxide in terms of its global warming potential. According to the United Nations Environment Programme website, with the full and sustained implementation of the Montreal Protocol, the ozone layer is projected to recover by the middle of this century. Without this treaty, the ozone layer depletion would have increased tenfold by 2050, compared to current levels, and resulted in millions of additional cases of melanoma, other cancers and eye cataracts. It is stated that the Montreal Protocol is saving an estimated two million people each year by 2030 from skin cancer. To date, the Parties of the Protocol have phased out 98% of the ODS globally compared to the 1990 levels.  Because most of these substances are potent greenhouse gases, the Montreal Protocol is also contributing significantly to the protection of the global climate system. The Montreal Protocol’s treaty control measures have reduced greenhouse gas emissions of an estimated 11 gigatons a year. Under the Kigali amendment that limits the use of Hydrofluorocarbons, it is expected to prevent a further 105 million tons of carbon dioxide equivalent of greenhouse gases- the single largest contribution the world has made towards keeping the global temperature rise “well below” 2 degrees Celsius, a target agreed at the Paris Climate Conference.

Given all these factors and more, the Montreal Protocol is considered to be the most successful environmental agreements of all time. What the parties to the Protocol have managed to accomplish since 1987 is unprecedented and it continues to provide an inspiring example of what international cooperation at its best can achieve. 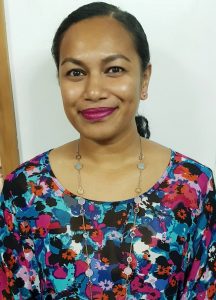 References:
Union of Concerned Scientists. (2017). Is there a connection between the ozone hole and global warming? Retrieved 8th September, 2021 from https://www.ucsusa.org/resources/ozone-hole-and-global-warming