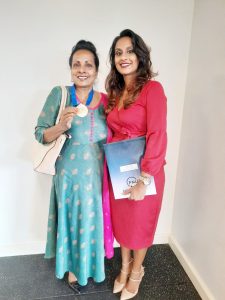 Fiji’s national flower, the Tagimoucia, may be endangered or extinct in the near future if the threats posed by global warming are not addressed.

Narayan is pursuing a Master’s by research at FNU entitled “Predicting climate-change impacts on the geographic range and extinction risk of Fiji’s national flower” and is supervised by the CEST Associate Dean Research, Professor Todd Dennis, and Dr Visheshni Chandra.

Her research aims to characterise the ecological niche of Tagimoucia using species distribution models, predict changes in Tagimoucia’s geographic range under various climate-change scenarios, assess extinction risk, and identify priority areas for the conservation of the species in Fiji.

This research complements FNU’s Strategic Plan 2021-2026, which recognises both the immediacy of the climate emergency and the need for systemic change, therefore, placing environment sustainability as an all-encompassing theme for the University’s long-term goals. Narayan’s research is also aligned with Strategic Development Goal #13, highlighting the need to “take urgent action to combat climate change and its impacts”.

“Fiji has a high rate of endemism and there is an urgent need to conserve and protect its valuable natural heritage before its biodiversity is lost due to climate-change impacts,” she said.

“Rarity itself increases the chances of species becoming endangered and extinct. Tagimoucia is an irreplaceable natural heritage of Fiji hence we cannot afford to lose such a national treasure.”

Narayan hopes that through her research, more practical tools for conservation will be developed, not just for the Tagimoucia but for endemic plants in Fiji’s cloud forests.

She added that she wishes to continue to raise awareness of the need to protect and conserve Fiji’s rare species given their vulnerability.